So, on Thursday, January 4th, Rafe Judkins, the showrunner hired by Sony for the Wheel of Time Series, posted this to Twitter: 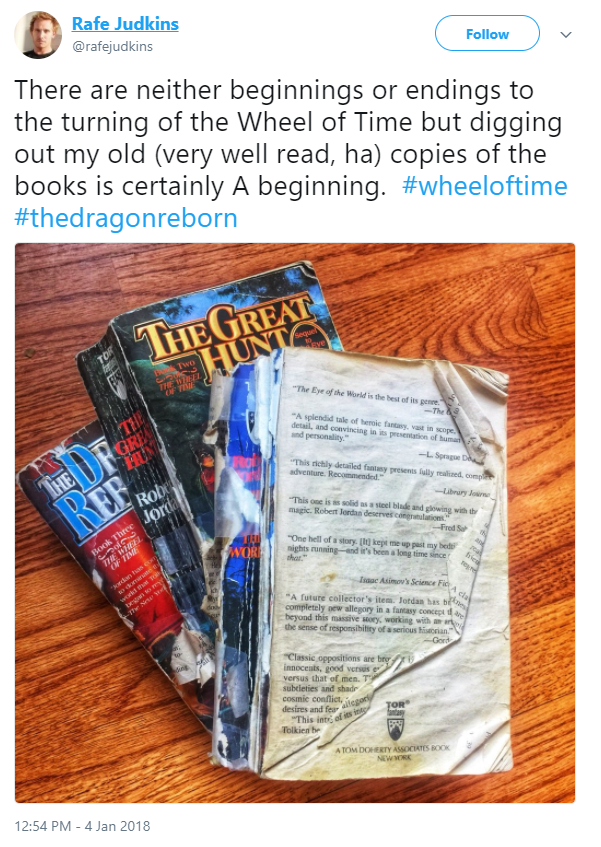 This definitely made people curious, as they're very well-read copies of the books, and we're all excited for some kind of news. However, it seemed like this was just a weird teaser, until...

HollywoodReporter posted an article on the recent Jumanji remake, of all things, and it included a line about "The Wheel of Time" television series.

One of those announcements will be a television series for Wheel of Time, a fantasy series based on the work of Robert Jordan that has been compared to Game of Thrones. This franchise has been the subject of much mystery and speculation. When FXX rushed the production of a pilot and aired it at the odd hour of 1:30 am, all sorts of discussion proceeded on message boards and in the news media on whether the gambit was an attempt by one production company to hold onto rights. That led to a slander lawsuit, which was later settled. Now, Field is prepared to announce a future for Wheel of Time.
Click to expand...

Right now, it seems like we're waiting to hear more, but anything else we hear will be posted here!
Bonded to Asandra.

It’s very encouraging to see that the people people running it have read the books!

Those are some seriously loved books.

This makes me happy
I expect to pass through this world but once. If, therefore, there be any kindness I can show, or any good thing I can do, to any fellow being let me do it now. Let me not defer nor neglect it, for I shall not pass this way again.

Those books have seen things...

Yes, I am a Brother >:< Bonded to Cattrin and Maibella >:< Pronouns: dealer's choice​

Yeah, that look a but like the version of EotW that I brought to Honduras, and to US and other places.

It is kept together with duct tape

Nurse Sedai, Knight of the Glitterati

I've got several copies that look like that of different books in the series! Perhaps it means we will have someone stick closely to the storyline?

First sister to Tsubasa and Keisha. Ex-Bond of Kelgan the White.
DM is my other home.

Has he only read untill the Dragon Reborn though :scratch

Do you wish to contribute to the Library? Email or PM me!​

I don't trust those are actually his copies.
How can WE serve? ~ Submit your TV.Net merch ideas!

If Harriet has approved him, I'm optimistic
Ingenious Ahole :bubble​

Y'all! Be nice! He's trying!
Bonded to Asandra.

I appreciate his enthusiasm?

No, I totally get it. I mean, he's apparently a long-term fan of the series, so I assume he's read all of the books already and is just doing a refresher of the first few right now to get a feel for how the plot would develop as a television show.
Bonded to Asandra.

And let's be honest, taking a picture of the entire series is difficult to do without a satellite camera :arch
Katrie's sister mentee and coffee friend| Right hand to Leala, Empress of the Universe | Jarl+Liam+Adanys=aspirational triplets

It's difficult not to feel jaded

I'm excited that we have development like this, though - especially if Harriett is working closely on this project.

Also, @Adanys Wynterwulf , that sounds like it could a really fun contest.

Also the first three books are basically the same subplot. The later books just build on the resolution and discovery of The Dragon Reborn.

@Dovienya el'Korim using a sat cam, or taking a pic of the entire series?
It could be a great way for people to showcase their collection.
Katrie's sister mentee and coffee friend| Right hand to Leala, Empress of the Universe | Jarl+Liam+Adanys=aspirational triplets