S1E7 “The Dark Along the Ways” —w/Book Spoilers

Aulrick Vendour said:
Well, not betray her, exactly. Just be her downfall.
Click to expand...

And Min did not say Siuan. She said the Amyrlin Seat. So while Moiraine may believe it to be Siuan, I don't in actuality believe it will let be.

The Ghost of the White Tower

Yes, betray might've been the wrong word there. Min sure leaves a lot more questions than answers though lol

Cahalan Sothron said:
And Min did not say Siuan. She said the Amyrlin Seat. So while Moiraine may believe it to be Siuan, I don't in actuality believe it will let be.
Click to expand...

Cahalan Sothron said:
And Min did not say Siuan. She said the Amyrlin Seat. So while Moiraine may believe it to be Siuan, I don't in actuality believe it will let be.
Click to expand...

Wow. So much in this episode, yet I feel like not that much happens. As usual :P

I like how we get glimpses of what Rand has been struggling with throughout the season in flashbacks, but that should have been given some more time. I am fairly certain I only understood that because I knew what that was.

LOVE Tigraine. She never even said anything. Killing Illianers, fighting, IN ACTIVE LABOUR. And Tam showing compassion, much better than just finding the baby afterwards

I have no problems with them finding Min in Fal Dara. I'm just glad they even bothered to include her. I wish she had said that Egwene was not one of the three beautiful women though...

I think that the infighting between the Two Rivers folk are meant to be helping with the eventual split that happens in Great Hunt. Though that was Mat not wanting to be near Rand.
I actually thought it was Mat coming out of the Ways, but I suppose that was Padan Fain?


I don't like how the Blight looks, that was not how I imagined it AT ALL. How can you travel through that and not touch anything? That didn't look sickly and warm to me, that was just near-dead brambles. The Ways are also strange.

What is with Agelmar being rude? That seemed like an unnecessary change for me...

It was definitely Padan Fain. Rand saw him clearly in Fal Dara.

My notion of what the Ways would look like comes from dreams I have had, where I am in a deserted public place that has no lights on anymore. It's a very specific image/feeling that I had no expectation of being met, but it still made their overall look/feel jarring for me.

I didn’t like how Moiraine ws the one to lead them into the ways, then asked Loial what the Machin Shin was, not gettong an explanation for it and afterwards Moiraine told the gang not to bother about what it told them. I loved the ways in EotW and this is probably the inconsistency that bothers me the most so far in the series.
Let's just pretend I have an awesome signature.
avatar by Phoenixlu

We found out why Laila was so upset! That's been bugging me all season! She knew Perrin had a thing for Egwene (in the show-world) and that she was his second choice. That's why she didn't go to Egwene's braid ceremony or to the party at the Winespring Inn, why Nynaeve basically told him to go pay more attention to his wife than to Egwene, and why she calmed down when he reassured her that he loves her. I don't like it, but I am very glad to have that question answered at least.

So they released a promo image of Padan Fain holding
what appears to be an Avendesora leaf. This could explain things like how the trollocs are using the ways, and how they will be used in the future without a channeler along for the ride. 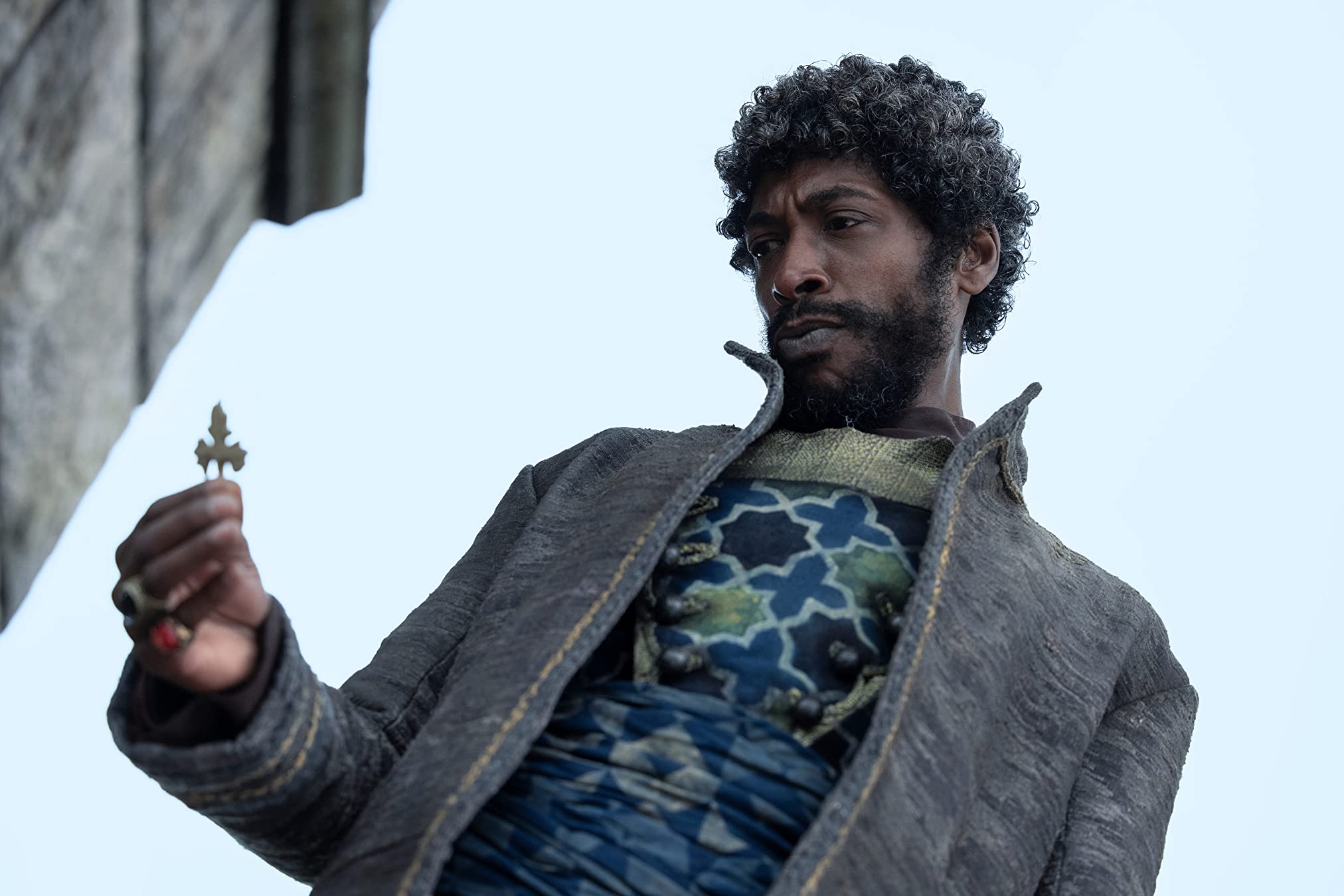 The Aiel were never my number one thing I loved about WoT, but that cold open was the most amazing choreographed fighting I've seen on screen in a very long time. It sold the Aiel as incredible warriors without ever speaking a word. I can't wait to see how they portray the extended culture in future seasons.

I always saw the Ways as a kind of MC Escher painting come to life, but in retrospect that would require seeing the other platforms which doesn't make a lot of sense. I like the show's idea of Machin Shin better than the books.

I also liked replaying the moments when Rand channeled, but this time with the weaves visible.
Rollyn Montagorae
Gaidin of the Dai M'Hael Company
Bonded to Dralyn Montsier​

Rollyn Montagorae said:
I always saw the Ways as a kind of MC Escher painting come to life, but in retrospect that would require seeing the other platforms which doesn't make a lot of sense. I like the show's idea of Machin Shin better than the books.
Click to expand...

I think there was one shot were they passed under another pathway so you could see it was strangely shaped one over the other.

Jandar D'Alpelk said:
After having just watched the intro...why isn't she wearing a veil? The whole scene is awesome, but this vexed me so hard that I had to pause and vent here before watching the rest of the episode ...
Click to expand...

She lowered her veil to give birth and was attacked, I don't think she was overly concerned about the Toh that she incurred for killing while unveiled at the time. Had she lived I have no doubt that she would have met her Toh. As it was she met it by giving up her life while birthing tlHe who comes with the dawn

Fauna Kemp said:
Omg such a great episode! The one main thing I'm not connecting is what Min said to Rand "Rainbows and Carnivals and three beautiful women". I get the 3 women part but the rainbow and carnival has stumped me. Can anyone explain? Also her vision of Rand holding a baby, is that a nod to his future twins?
Click to expand...

Yenie Antagar said:
So Moiraine thinks everyone going to the eye might die unless they're the dragon and she's just been told that the woman she loves is going to betray her, I don't find it that strange she would go alone (well, with Rand) and risk her life, to be honest.
Click to expand...

Sylas Ehlonite said:
So they released a promo image of Padan Fain holding
what appears to be an Avendesora leaf. This could explain things like how the trollocs are using the ways, and how they will be used in the future without a channeler along for the ride.

I was hoping they’d do this, since channeling to get through the gateway is stupid.

Another small thing though, was Shaiel actually dressed in white, or would that qualify as grey? I mean, yes, they wear camo, but not white, even whilst fighting in snow...

That episode was so good, I loved it.
The Aiel scene was so epic, It reminded me of just how amazing they are.
I'm so glad that we finally got to see Rand realize that he is the Dragon Reborn.
Lan and Nynaeve are my favorite couple in the books and I love that we're getting more of their relationship in the show. I like that she followed him to his friend's home (The man's face when Lan introduced Nynaeve to them all was priceless) and the fact that Nynaeve went into Lan's room after he'd said goodnight, that girl was not giving up so easily.
It's so interesting seeing Rand and Egwene's relationship knowing where it's going.
I love Min, she looked much older than I pictured her. Even though I know she's around Nynaeve's age in the books. I loved the way we got to see her viewings, they were really cool.
There were so many moments where I and my sister (I'm watching the show with them and my dad) went, "Mat would love this." or "That would have been the perfect moment for a snarky remark from Mat" I think we really miss him in the show.
Moiraine and Rand leaving the rest of the group was just plain cruel. Especially since Moiraine has a Warder that knows everything about the Blight and yet she didn't take him.
I loved this episode so much, the only one I enjoyed more was episode one. And I cannot wait to see what's going to happen and how the show is going to end.
Enyna Salyros

What really gets me about Rand and Moiraine talking off alone is that there are 2 other ta'veren who she just leaves behind like there's nothing special about being ta'veren.

She makes mention in episode 1 that there are rumors of 4 ta'veren in the two rivers, like that was significant and yet that's the only mention of it we get.

Mat grabbing the dagger from Shadar Logoth wasn't just him being a bone head it was his ta'veren nature weaving ta'maral'ailen around him.
Without the dagger Mat would never have had holes in his memory that he needed filling and never would have formed the band of the red hand.

Good episode. One of the strongest. I like pretty much most of it.

no Mat is BEYOND stupid. Should have recast him in time for the end in my opinion. No made up story arc is worth the change.

blights weird and dried up. It’s supposed to be alive but all nasty and putrid. Maybe it gets like that further on and it’s just dead at the edges instead of normal.

anyone who comes to the Eye is super dead, is a weird way to raise the stakes. A) doesn’t really makes sense and B) why would you tell them that? Do you want the Dragon to go there or not? You let Matt leg it……. So maybe not? Like what if Mat’s the Dragon…. Everybody just suicide mission?

I wonder more and more WTF they were thinking with eps 5 and 6. We could have more of this kind of good stuff yet we stooged around with stupid Stepin funerals for no good reason.

perrin, Egwene, Rand love triangle makes me go uuurgh. I hate love triangle story lines more than anything ever. But that’s a me thing. But man winging baby Rand in that scene.
Last edited: Dec 18, 2021

If you come to Mafia bring a shotgun, But if you do you're a fool, 'cause I duel to the death.
Trying to kill me you'll take your last breath. I got the skill, come get your fill 'Cause when I kill to live, I live to kill.