Hullo and welcome! It's a pleasure to have you here!

Cynayne Nilonne said:
Hi Sowinda and welcome. I'm new here too, but a fellow servant of feline overlords I have to say, your current reading faves make for an interesting list. I'm a fan of Vonnegut; that one is going on my must read list.
Click to expand...

Vonnegut is one of a handful of authors from my old high school reading list I came across while I was moving house, which I had never read in school... I had an awesome, curmudgeonly Literature teacher. There were only enough students to separate us into two classes, and mine was the second one of the day. So whenever we'd roll in, he'd sigh and say "I just got done listening to third period blather on about [insert classic here], and I don't want to go through that hell again. So we're going to read [random excellent book not on the reading list]." So my planned reading this summer is, like, all the Vonnegut, and things like Brave New World and The Grapes of Wrath .

I never heard someone say that they are a fan of cyanobacteria. :geek But I approve
Click to expand...

Omg cyanobacteria <3 <3 <3. They are ancient, supa cool, and also... adorable under a microscope. I named my rats after them. Euglena is rat-shaped (bottom-heavy potato shaped ), and its flagella looks like a tail. Also very quick. Though at least the rat would come back when you called her.

It's great to meet you!

Also your city of origin can only make me think of:

Hahaha I wish he were the first thing I think of when I think of Eugene... But no, my brain is stuck on Eugene from Grease. 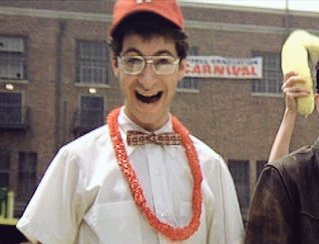 Hey, Eugene! I've worked in/out/around Eugene several times for a conservation corps - NorthWest Youth Corps. It's one of my favorite cities! But not in June and July - pollen count's too high. D: D: D:

How did you end up migrating from Idaho to Cali to Eugene?
Click to expand...

Oh cool! I used to live right down the street from the NWYC

. Much agreement on the pollen count... Those dang cottonwood trees are my nemesis. Does the NWYC send you different places all year?

Re: migrating, my parents were both extremely religious and also fed up with how expensive California was, and when they researched hotspots for their particular religion (Roman, Latin-Mass Catholic), Coeur d'Alene, Idaho popped up, and we went when I was about 11.

Then, I always wanted to live in Oregon because in terms of climate and scenery it seemed like a mix between California and Idaho... I love the mountains and forests thanks to Idaho, but I also hated living that far from the ocean. My parents went their separate ways when I was a teenager, but then, weirdly, they both ended up in Oregon, so I followed them out after I left college. Best decision I've made for myself, I love it here!!

I think it's great that you've studied so many languages. I've done Spanish, French, Latin, Ancient Greek, and one semester of Chinese. Is there any particular reason you're familiar with so many, or is it just a hobby?

Also, feel free to send me a visitor message (or later a private message after you're a citizen) with any questions you might have, or just to talk!
Click to expand...

Spanish was my mother's first language, so I've always wanted to become fluent in it.

However she refuses to speak it with me (she doesn't look Mexican at all, and my Aba raised her to "pass as white", so she has a lot of discomfort associated with it ). Latin and Ancient Greek were required courses at my parochial elementary and middle school, and Latin was required at my junior high and high school. I tried German because I wanted to see how differently a non-romance language might operate. Russian, because there was a Russian boy at my school who I had a major crush on . Korean because I am maybe unhealthily addicted to Korean historical dramas, and because I wanted to see how differently an Asian language was from the European ones I tried out.

Why did you learn the ones you did?

I've been pleasantly surprised at how many people on this site talk about the different languages they know or have dabbled in. Most of what stalled my pursuit of languages was that, aside from paying money for a class or wandering around very sketchy pen pal sites, there's really nobody to converse with in a second language.

I'm currently trying to focus on Spanish once and for all (my job learned that I know a little and now they send me every Spanish call we get... which has been only occasionally successful ), if anyone wants to suffer through some garbled grammatical conversation!!

Sowinda al’Morwyn said:
Why did you learn the ones you did?

I had to pick either Spanish or French in middle school and chose Spanish. Then there were scheduling issues with that my 8th grade year, so I took French instead. But I still wanted to go back to Spanish, and I've always loved both, so I took them both in high school. When I got to college, I started out wanting to be a translator or interpreter, so I took a semester of Chinese. I didn't really like it though (mostly the writing part, and how it wasn't really connected to the spoken language), decided I didn't want to go down that career path after all, and switched to an Antiquities major with an emphasis in Classical Studies. Thus, I started learning Latin and Ancient Greek (the latter of which I never really liked, but had to take anyway).

Bonded to Brandon of DM​

Welcome to the Tower! I've also dabbled in a few languages and would like to get a better grasp on my Spanish We can try out our garbled Spanish together

Oh, now that sounds like fun What locales have you ridden? I'm a n00b MTBer, btw

Welcome to TV.net, you sound amazing!!! I love cyanobacteria as well

A lot of us here find it easier to express ourselves through the virtual world rather than in person, so you are in good company! Feel free to message me or ask for help anytime!
RL Mother of Elyss Koh'inor